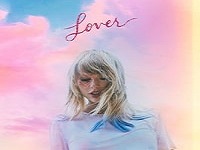 Lover is the seventh studio album by American singer-songwriter Taylor Swift. It is scheduled to be released on August 23, 2019. The album is Swift’s first release under Republic Records. The lead single “Me!” featuring Brendon Urie of Panic! at the Disco was released on April 26, 2019. The second single “You Need to Calm Down” was released on June 13, 2019. The title track was released as the third single on August 16, 2019. Aside from Urie, Lover also features a collaboration with the Dixie Chicks. The album was recorded in under three months, finishing on February 24, 2019.